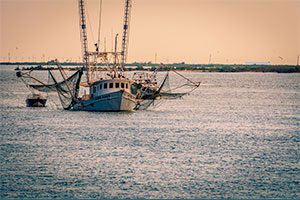 Selected Findings:
What Were the Direct Impacts of the 2010 Deepwater Horizon (DWH) Oil Spill on the Commercial Blue Crab Fishery? 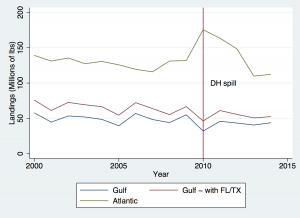 Authors’ calculations based on monthly landings data downloaded from the NOAA Commercial Landings database. The vertical line in each figure indicates the Deepwater Horizon spill in April 2010. 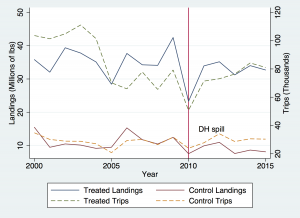 Annual commercial blue crab landings and crabbing trips in Louisiana basins defined as treatment and control, as discussed in the text. Authors’ calculations based on data provided by the Louisiana Department of Wildlife and Fisheries. The vertical line in each figure indicates the Deepwater Horizon spill in April 2010. 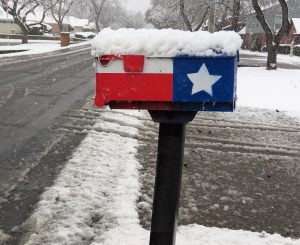 The winter storm that ravaged Texas this month did not come as a surprise to scientists. “The future is not going to be like the past,” CRGC director Melissa Finucane, who also serves as a co-director of the RAND Climate Resilience Center, told TIME Magazine. “If we could just plan a little better, we could anticipate some of these problems.”

What could communities, government officials, nongovernment organizations, businesses, and scientists do to build community resilience to large oil spills? Answering that question was the goal of CRGC researchers as they researched and wrote their final report, Building Community Resilience to Large Oil Spills: Findings and Recommendations from a Synthesis of Research on the Mental Health, Economic, and Community Distress Associated with the Deepwater Horizon Oil Spill. 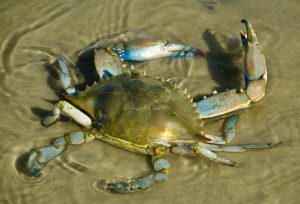 CRGC researchers have been busy publishing new research. Two of note: Jacqueline Fiore, Craig Bond, and Shanthi Nataraj released a working paper on “The Impact of the Deepwater Horizon Spill on Commercial Blue Crab Landings”; and Andrew Parker, Amanda Edelman, Katherine Carman, and Melissa Finucane have a journal article “On the Need for Prospective Disaster Survey Panels.” Many more papers are available, linked from our website. View all research results »

CRGC Researchers Present at the 2018 Society for Risk Analysis 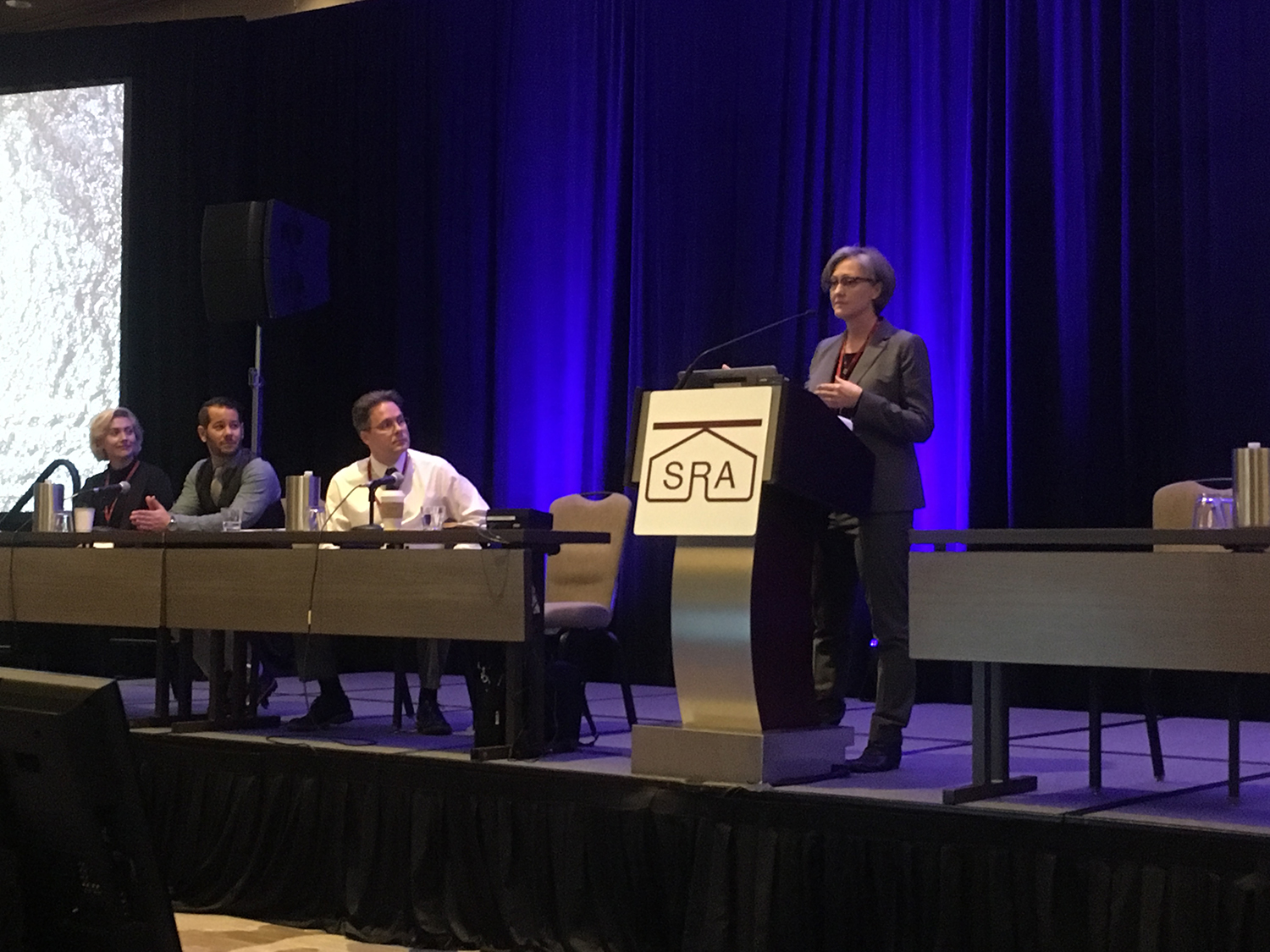 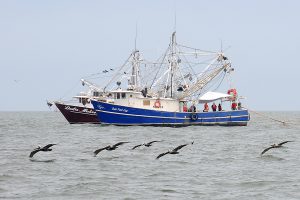 Recent news suggests that the Deepwater Horizon oil spill will soon be eclipsed by the millions of barrels of oil leaking from the Taylor Energy platform since 2004. The Coast Guard this week ordered Taylor to contain the mess, or face massive fines. But cleanup alone may not fully mitigate the damage and effects may linger, as they did after the Deepwater Horizon spill, writes CRGC director Melissa Finucane. Read more » 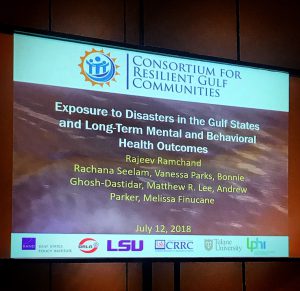 The Natural Hazards Center, in partnership with the International Research Committee on Disasters (IRCD), and with funding from the National Science Foundation, convened its 2018 Researchers Meeting in Broomfield, Colorado on July 11 and July 12, 2018, which focused on improving rapid reconnaissance research and featured sessions designed to identify pressing research needs, better coordinate researchers and research teams, and improve data collection, sharing, and archiving. This year’s meeting, designed to convene researchers across disciplines, who recently received National Science Foundation RAPID grants, as well as those who have ongoing hazards and disaster related research projects, featured the Consortium for Resilient Gulf Communities’ (CRGC) recent findings related to exposure to disasters in the Gulf States and long-term mental and behavioral health outcomes. Read more » 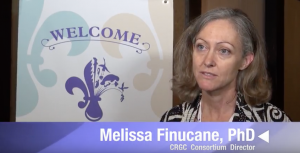 At this year’s Gulf of Mexico Oil Spill & Ecosystem Science Conference, The Gulf of Mexico Research Initiative (GoMRI) interviewed Dr. Melissa Finucane– Senior Social and Behavioral Scientist at the RAND Corporation and Director of The Consortium for Resilient Gulf Communities- about CRGC’s latest research findings and progress assessing and addressing the impacts of the 2010 Deepwater Horizon oil spill on the health, social, and economic wellbeing of people in the Gulf Coast region. Finucane speaks to CRGC’s research, outreach, and education initiatives, which are aimed at helping communities across the Gulf Coast to more effectively understand, withstand, and overcome the multiple stressors brought on by such disasters. Learn more>> 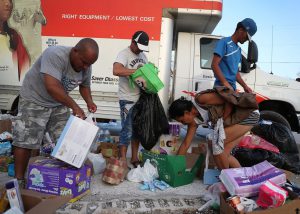 Accessibility to transparent, up to date data has proven to play a critical role in both individual- and community-level capacity to prepare for, respond to, and recover from disaster events, such as a hurricanes— Something that was especially evident following Hurricane Katrina. Denice W. Ross, a Public Interest Technology Fellow at New America and a co-founder of the Obama administration’s Police Data Initiative, spent more than a decade in New Orleans building community capacity to use government data and is continuing to broaden her work in the “open data” space by aggregating high-value data sets that can aid communities impacted by disaster. Learn more>>

Check out the RAND Gulf States Policy Institute’s Summer Newsletter featuring a Q&A with Elizabeth Thornton, who heads up outreach efforts for the Consortium! You’ll hear the latest on how CRGC’s research, outreach, and education activities are helping communities across the Gulf Coast to more effectively understand, withstand, and overcome the multiple stressors brought on by such disasters as the 2010 Deepwater Horizon oil spill. Learn more » 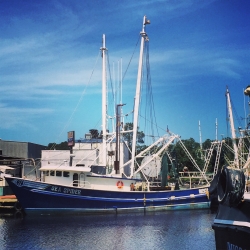 CRGC researchers working on assessing and addressing the economic impacts of the oil spill developed a new resource to assist business owners and employers, researchers, community members, and other stakeholders in locating information on the fisheries and tourism sectors, and on oil spill claims, from a wide variety of potential sources. Check out the Database and User Guide on CRGC’s new Resources page!

Shanthi Nataraj is an economist at the RAND Corporation and a professor at the Pardee RAND Graduate School. Her research interests include economic development, labor markets, and environmental and resource economics.

Jacqueline Fiore is a Ph.D. student in the Economic Analysis and Policy program with the Department of Economics at Tulane University. She specializes in applied microeconomics and her research interests include health economics, economics of disaster, development economics, and public policy. Recently, she has been working on the economic and health impact of the 2010 Deepwater Horizon oil spill. Specifically, she is interested in the impact the oil spill had on firms and human mental health outcomes in Gulf Coast communities.